Home » pregnancy test » First Signal Pregnancy Test – What Is It And How To Perform? 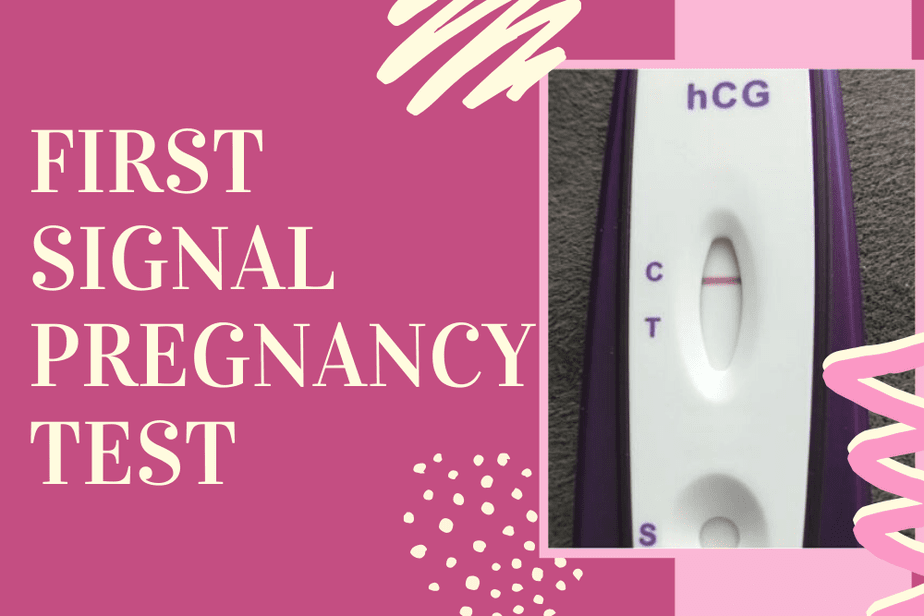 When you are trying to conceive a baby your body gives signs pointing out that you are pregnant. These could be in the form of symptoms or tests. The first signal pregnancy test is the earliest test which accurately points out that you are having a baby or not. It utilizes the levels of hCG in your body fluid.

How does the first signal pregnancy test works?

When you conceive a baby it develops inside your womb. The baby is too little at this time of his life and he is totally dependent on you for his nutrition which he gets from the placenta. Besides providing nutrition, the placenta also secretes a hormone named human chorionic gonadotropin (hCG) which increases with gestation.

This hormone first appears in the blood of the mother and is detectable as early as 6 days before missing the monthly cycle. Later on, it is also secreted in the mother’s urine. Since this hormone is only present during pregnancy it can be detected to confirm the pregnancy.

Also Read: Top 10 Homemade Pregnancy Tests That Will Sort Out Your Confusion

When to perform the first signal pregnancy test?

It is pretty important to detect pregnancy as early as possible because the first 2 months are the most important period of the baby’s life. The baby develops all the major organs during this period. Any harm whether physical or chemical is most dangerous during this time and usually results in the termination of the baby.

This makes the detection of pregnancy a priority. However, in most of the cases, there are no obvious symptoms of pregnancy before missing your monthly cycles. Luckily you can perform this pregnancy test as early as 6 days before even missing your periods when testing the blood. However, the test depends on the levels of hCG as well as the body fluid used. The accuracy of this test is more than 99 percent from the first day of missed periods for urine.

Detecting pregnancy early helps you a lot. You can start taking better care of yourself and avoid exertion as much as possible. You can improve your diet and avoid exposure to hazards. All this helps you deliver a healthy baby.

Levels of hCG and the first pregnancy test

Kits available for pregnancy tests only detect the presence of hCG and do not quantify it. It is not necessary to quantify it as it is only produced during pregnancy. The levels of hCG start appearing just after 11 days of conception in the blood and after 15-24 days in the urine. The levels double every 3 days from here onwards.

For a pregnancy test to be positive the levels have to be greater than 25mIU/ml. Any levels below this aren’t picked by the kit. On quantitative testing, the levels below 5mIU/ml are considered negative. If the levels are between 6 and 24 you are going to retest a few days later to check the rise in the levels.

How to use the kit?

You can perform this pregnancy test on both blood and urine which have their separate kits. The urine kits are commonly used as these are cheaper and easier to use. Here is how you should use a urine pregnancy kit:

It is a pretty simple pregnancy test and can be repeated again as the kit is cheap and readily available. The kit for the blood test is similar and requires a blood sample which makes it a little scary for the mother. Since the accuracy is no different it makes it unnecessary. On the other hand, blood quantitative testing has a benefit of the detection of pregnancy as early as 6 days before the monthly cycles.

Also Reading: What Are The Chances Of Getting Pregnant Before Period?

How to read the first signal pregnancy test?

The first signal pregnancy test results are the easiest to interpret and you require no supervision from anyone. When your urine migrates up the strip it produces a certain number of lines on it.

If there are two lines on the strip i.e. one in front of C (control) and other in front of T (test) it means your sample contains hCG. Congratulations! You are pregnant and you should plan a visit to a doctor.

If there is only one line in front of C (control) it means that there is not enough hCG level in the sample. It indicates that you are not pregnant. However, if the cycle doesn’t come within a week you should repeat the test as it could mean that the levels were low at that time.

If there is no line on the strip it means that the test is performed wrong and the sample didn’t migrate to the top. You should perform it again with a different strip.

How accurate is the first signal pregnancy test?

The accuracy of the first signal pregnancy test is more than 99 % performed from the first day of the missed cycle onwards. Before this point, the test has a low incidence of false-negative results because of the low levels of hCG. However, a quantitative blood test at this stage has better accuracy than the kit method.

Where to buy a pregnancy test kit?

Pregnancy kits are readily available at medical stores and you can get it without any recommendation from a doctor. You can also order them online from sites like Amazon, etc.