Home » baby health » Newborn Grunting And Squirming While Sleeping – Is It Normal? 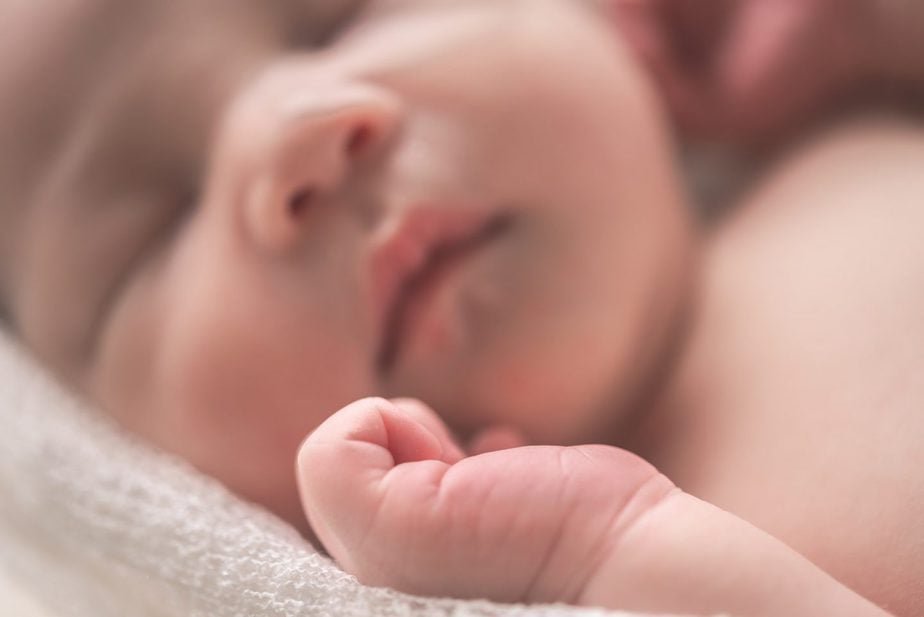 You must have seen your baby sleeping and adored him or her. Sometimes, babies show weird patterns in sleeping such as only sleeping when they are held or making weird noises while sleeping. If you have observed the latter pattern, you must be wondering why is your newborn grunting and squirming while sleeping. Is it normal?

However, this always isn’t the case. When the grunting is more regular i.e. associated with each breath of the baby or is more towards the end of the breath and is associated with some other signs like; fever, rapid breathing, crying and distress it could mean some serious underlying illness.

Newborn grunting and squirming while sleeping: What are the causes?

Newborns make a weird noise while sleeping after they reach the age of 2 weeks and this weird noise can last up to 6 months of the age. This happens because after 2 weeks of age newborns start spending more time in the REM (rapid eye movement) phase of the sleep. REM defines the active part of the sleep in which you see dreams, make noise, and can act weird as well.

Newborns between the age of 2 weeks and 6 months can have up to half of their sleep in the REM phase. Thus, they are making all these weird noises because they are having dreams. However, there are more explanations to it which include:

Small nostrils of the newborns

Like their cute little bodies, their nostrils are little too which often get clogged with mucous or milk making them narrow passages for the air. So when the air passes through them they produce whistling or rustling sound. Your baby finds it annoying too just like you and tries to clear them making that grunting noise. Try to wipe the nose and it mostly helps with the noise, sometimes using salt water helps the dry nose to clear the passage as well you may try it after consulting your doctor.

Grunting is not the only voice your baby makes during the sleep. You can hear your baby crying, laugh, whimper and even yelp while he or she is sleeping. Pediatricians often equate these sounds with sleep talking and these sounds are completely normal. Moreover, your newborn will learn to overcome these noises with the passing weeks.

Gas is troubling your baby

It is normal at this age for your baby to develop gas in his or her stomach. This gas can be troubling enough for your baby to cause grunting while passing it. Make sure to feed your baby a healthy diet. There is nothing much to worry however, if there is too much of it and associated with diarrhea or constipation you might want to consult a pediatrician.

If you are new parents and the grunting noise along with pauses in the breathing has made you alarm there is nothing to worry about. Your newborn is just too young and he or she has to learn a lot of things and regular breathing is one of them.

When your baby is awake he or she normally breathes up to 40 times per minute. However, when he or she sleeps the control over breathing becomes irregular. The newborn may be taking half as many breaths at one time and double the breaths at another time. There is nothing to worry at all he or she is just a newborn and learning to control his breathing. These alternative fast and shallow breathing pattern is called periodic breathing of newborn.

Just like breathing, digestion is in the primitive phase as well in the newborn. However, they eventually take control of these things with time.

What happens is when you feed your baby at night and place him or her supine the excessive meal causes the stomach to spit up the meal back into the esophagus (food pipe)  even up to pharynx (mouth). This produces strong grunting noise.

To avoid this to happen, you should:

Remedies for newborn grunting and squirming while sleeping

You can always visit a pediatrician and get your satisfaction that the grunting of your baby is normal or not. However, save this hustle for a little later and try these simple remedies:

Your baby is going to learn the control of these things with time. So there is nothing for you to worry at all.

Newborn grunting and squirming while sleeping is not always a normal phenomenon. Rarely it could indicate an underlying respiratory disorder like; asthma, pneumonia, and sepsis. Here are some signs which can help you distinguish between normal and respiratory disorder:

Also read: Why Is My Newborn Always Sticking Out Tongue? Is It Normal?