Dollar Pregnancy Tests – Are They Reliable?

Have you missed your period? Have you been trying to conceive and anxiously waiting for the “good news”? Or did you have unprotected sex accidentally and fear you might be pregnant? Finding out if you are pregnant can be a life-changing event, and you do not want to get it wrong. Whether you are hoping for a positive or a negative result, the Dollar General Pregnancy Test can validate your hopes or allay your apprehensions.

Also Read: Probable Signs Of Pregnancy – All You Need To Know

What is the One Step Pregnancy Test Dollar General?

The Dollar General Pregnancy Test is a pregnancy kit available at the Dollar General stores, one of the most profitable chains of variety stores in the US, famous for providing a wide range of products at meager rates.

How is it different from most other pregnancy tests?

Unlike most other pregnancy tests, which can cost you 20 to 50 bucks, it costs only $1! So you are probably less likely to regret spending on it even if your pregnancy test results do not meet your expectations. It is a good combination of price and quality. Though it is not extremely sensitive, it is 99% accurate.

Also Read: Clear Blue Pregnancy Test – What Is It And How To Perform?

How does it work?

Like most other home pregnancy tests, the Dollar General Pregnancy Test is a qualitative test that detects the presence of pregnancy hormone hCG in urine.

Human Chorionic Gonadotropin hCG is a hormone secreted by the placenta of a pregnant female.

When does your body start secreting hCG?

During ovulation, the ovaries release an egg that can fuse with sperm. Once fertilization has occurred, the embryo travels to the uterus. It usually implants 8 to 10 days after ovulation in most successful pregnancies, according to research by A J Wilcox, D D Baird, and C R Weinberg.

This is the time when the cells surrounding the embryo start secreting hCG. The levels begin doubling every 72 hours and reach their peak in the 8–11 weeks of pregnancy. Then they decline and level off. Thus it is too soon to try to detect hCG before eight days past ovulation (DPO).

Also Read: Top 10 Homemade Pregnancy Tests That Will Sort Your Confusion Out!

When does hCG appear in urine?

The hormone first appears in the blood so that it can be detected earlier, about 11 days after conception. But this requires drawing blood and testing in the laboratory. So it may be painful and expensive.

Fortunately, only a few days later, hCG started appearing in the urine. All you have to do is pee on a pregnancy test strip 12 -14 days after conception.

Also Read: First Signal Pregnancy Test – What Is It And How To Perform?

Can you rely on the Dollar General Pregnancy Test?

Here comes the million-dollar question! The price tag can be enticing, but you surely do not want to mess up the results. It might have crossed your mind that buying a cheap pregnancy test will compromise the accuracy.

However, according to the FDA, the accuracy of a pregnancy test depends on the user. Mainly on how well she follows instructions and interprets results. This is why getting wrong results has something to do with the user most of the time rather than the product.

Also Read: What Are The Chances Of Getting Pregnant Before Period?

A Dollar General Pregnancy Test is quite sensitive. It can detect 25 mIU/mL hCG in the urine. However, it may not be as sensitive as some other expensive tests.

How early can the Dollar General Pregnancy Test detect pregnancy?

If you do not have regular periods, you can take the test 2-to 3 weeks after having unprotected sex.

When to perform the test?

When you are pregnant, your body starts giving you signs. But many women get these signs before the menstrual period (PMS), so they overlook them. You should perform the Dollar General Pregnancy Test when:

According to the American Pregnancy Association survey on the earliest sign of pregnancy, 29% of women reported missed periods, 25% nausea, and 17% change in the breast.

However, these symptoms can have many other reasons, so it is vital to confirm pregnancy with any test such as the Dollar General Pregnancy Test.

Also Read: Are You Using These Tablets Before Pregnancy? Best Prenatal Drug Guide

How to perform the Dollar General Pregnancy Test?

There is an expiration date on the packet. Do not forget to check it before buying one. Follow all the instructions to ensure accuracy.

What do you need to perform the test?

What will you find when you open the packet?

Use the notches to tear it open. When you open the foil pouch, you will find:

No special patient preparation is needed. A random clean-catch specimen is collected in a clean, dry container. However, rinse the cup with water before using it. Because a dirty cup or soap/detergent may interfere with your test results and invalidate them.

Best time to perform the test?

The Dollar General Pregnancy Test can be performed at any time of the day. But you can increase the accuracy of your results by using the First-Morning Urine (FMU). It has the highest concentration of hCG because it is not diluted.

If you cannot perform it in the morning, you can recreate your morning pee by not drinking for at least 4 hours and holding your urine. Drinking water can dilute your urine and affect your results.

Also Read: Best Funny Pregnancy Announcements You Will Ever Come Across

How to read and interpret the results?

A single line opposite the C, i.e., the Control line, must appear to validate your results. It indicates that your test has worked properly.

If two red lines appear, you are most probably pregnant. 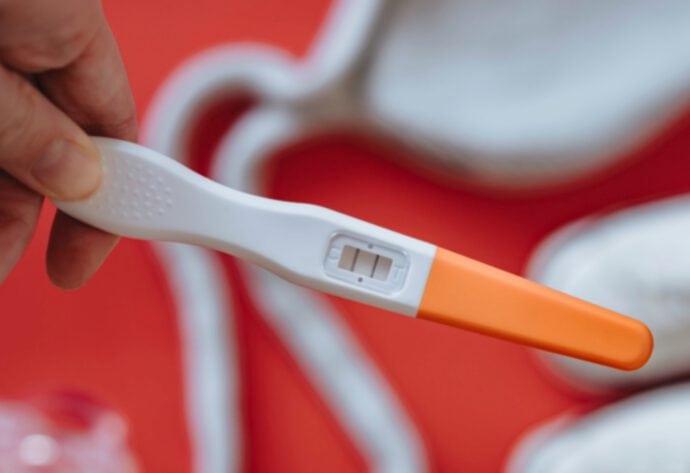 If a very faint line appears opposite the C (control line), it indicates that you might be pregnant, but the hCG levels are low. It is called an unclear positive result. You will need to perform the test again after a few days.

The appearance of the Control line only indicates that you may NOT be pregnant.

If no line appears, the testing kit may be expired, or the test has not been performed correctly. Repeat the test but do not use the same kit. A pregnancy kit cannot be reused.

Also Read: Why Am I Having Sore Breasts After Ovulation?

Can you get false-positive results?

Can you not be pregnant despite getting a positive result? Unfortunately yes. You may get false-positive results due to the following reasons:

If you do not follow all the instructions accurately, you may get false-positive results.

Make sure you read the expiration date before using it.

The time you are required to wait for your test results is critical. If you wait longer, an evaporation line can appear, and you can interpret it as a positive result.

It refers to a very early miscarriage that occurs at the fifth-week gestation. The fusion of egg and sperm occurs but the embryo never fully implants in the uterus. So you may have hCG in your urine and get a positive result. There is bleeding around the time of your menstrual period due to miscarriage, which is perceived as menstrual bleeding.

Also Read: Spotting During Ovulation – Answers to All Queries!

Some medicines increase your hCG levels. So you can get false-positive results if you are taking them. They include:

However, medicines that do not contain hCG have no effect on the test results. Oral contraceptives, antibiotics, painkillers, and alcohol do NOT affect the results.

You may be getting hCG shots as a part of your fertility treatment. So hCG levels can rise in urine 2 to 3 weeks after the shot. In this case, you should go for a blood test.

Ovarian cysts also cause a rise in hCG.

Also Read: Things To Do Before Pregnancy – Important Checklist For Mothers-To-Be!

Can you get false-negative results?

False-negative results are pretty common. They can cause stress and anxiety in women trying hard to conceive.

This test is not designed for early detection. You may have to wait for 2 to 3 days after your missed period.

Not using the test properly

You may be too excited to read the instructions carefully. But make sure you follow them to get accurate results.

Reading too early or late

You have to strictly follow the time mentioned on the pregnancy kit to read the results.

Diluted urine can result in false-negative results. Avoid drinking too much water before taking the test.

The hCG levels are lower in obese women. An inverse relation between BMI and hCG levels has been shown by research.

Also Read: How Long Does It Take Birth Control To Work?

You took the test: Now what to do?

If you get a positive result

If you get a positive result, repeat the test after a few days to be 100% sure. It is time to go to the gynecologist, confirm your pregnancy, and get prenatal care.

If you get mixed results

If you get a negative result

Performing blood tests and ultrasound exams will confirm pregnancy. Repeat the test after a week. Consult a gynecologist if you still get a negative result and no periods.

If you get continued negative results and no period

If your blood tests and ultrasound exams have confirmed that you are not pregnant, but you are still not having your period, consult a gynecologist to find the cause of amenorrhea.

Why might your period be late if you are not pregnant?

Several other factors may contribute to amenorrhoea or delayed periods.

Also Read: What is Medical Abortion? Its Types and Precautions

Also Read: How Old You Have To Be To Buy a Condom?

Also Read: All Newly Married Women Should Discuss This With Their Partners

Not having a digital display: A boon or a bane? 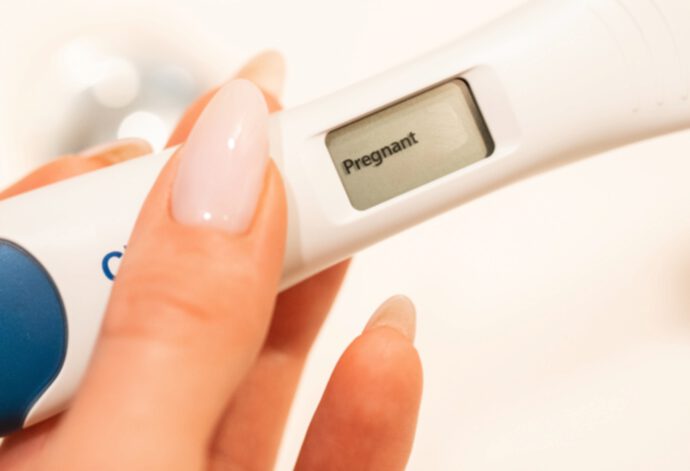 Most women find it difficult to interpret the lines. It is more convenient to read “pregnant” or “non-pregnant” on a digital display than to solve the control and test lines. However, Christina Hernandez Sherwood says she’ll prefer shades of gray rather than black and white in her article “Why I’ll always use dollar store pregnancy tests” in the Chicago Tribune.

Also Read: Why Is It Healthy To Become Pregnant Before 30?

Suppose you are looking for a reliable and cheap way to confirm your pregnancy. In that case, the Dollar General Pregnancy Test is definitely a good choice. However, make sure you follow the instructions properly and take the test at the right time. But whether you get a positive or a negative result, you should rule out the false results by seeing your doctor and having other confirmatory tests done!

PrevPreviousHow To Get Your Newborn To Poop? Safe Methods And Techniques
NextBaby Born With Teeth Superstition – Myths and Facts You Should KnowNext

TheRightParenting.com is designed for educational purposes only.
Consult with a medical professional if you have health concerns.